The central crisis staff announced that the second round of the testing will take place as scheduled on November 7 and 8. 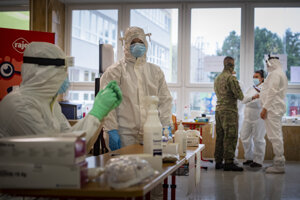 However, it will not take place in every district in Slovakia. Bratislava, Košice and 25 districts, where less than 0.7 percent of those tested were positive, will be exempt.

PM Igor Matovič noted that it does not mean that people in those districts with a positivity rate of under 1 percent COVID-19 are safe and cannot get infected.

Mobile test sites will be established

A mobile sampling place (MOM) will be established in each district, where people can get tested with antigen tests for free without stating any reason. Matovič announced that they will start to establish such places next week.

Twice a month, all employees of hospitals and patients will have an opportunity to get tested, along with clients and employees at care homes and those involved in critical infrastructure.

Matovič also said that after the second round of the testing, a negative test result will be required to cross borders when entering the country. The number of border crossings will be limited along with the border’s opening hours. He expects that about million tests will be conducted on borders per week.

Where the testing will take place

Beer and Coffee from next week

You may have missed

Rent prices are going down

Beer and Coffee from next week

8 months ago foreigner
We use cookies on our website to give you the most relevant experience by remembering your preferences and repeat visits. By clicking “Accept”, you consent to the use of ALL the cookies.
Cookie settingsACCEPT
Manage consent

This website uses cookies to improve your experience while you navigate through the website. Out of these, the cookies that are categorized as necessary are stored on your browser as they are essential for the working of basic functionalities of the website. We also use third-party cookies that help us analyze and understand how you use this website. These cookies will be stored in your browser only with your consent. You also have the option to opt-out of these cookies. But opting out of some of these cookies may affect your browsing experience.
Necessary Always Enabled

Any cookies that may not be particularly necessary for the website to function and is used specifically to collect user personal data via analytics, ads, other embedded contents are termed as non-necessary cookies. It is mandatory to procure user consent prior to running these cookies on your website.